LISTEN IN GOOD HEALTH! LONG LIVE THE POWER OF MUSIC!

Playing lead Alto was a real throw-back to good times and arrangements for MBB–It was a great nite all around….

A few things to point out for this Virgo September when so many of us saxophonists were born( mine is  sept.18th):

Tomorrow Saturday the 8th there will be a block party on the street i lived 8 years on in FT GREENE BROOKLYN –SOUTH ELLIOT STREET—I WILL BE PLAYING FROM 2PM-5PM with THE SOUTH ELLIOT STREET STOMPERS led by renowned bassist Ed Schuller.BIG FUN FOR ALL AGES!! 33 SOUTH ELLIOT was called ‘the music building’ when we lived there in the 1990’s–GREAT TIMES…..

ON SUNDAY SEPT 16TH I will be performing at MEZZROW in duo with Keith Brown who is also on my latest recording to be released ( see GIGS )–I have some special music for that nite!–LOOKING FORWARD TO –HOPE U CAN MAKE IT TO THIS GREAT VENUE!

And on Saturday Sept 22 i will do a SOLO FLUTE piece at the flute summit HOWLIN FOR JEREMY at Thompkins Sq Library ( east village NYC) FROM 3-5—Several other great flutists will also ‘howl’ for Jeremy Steig who’s soul is with us all! ( This is also one day before COLTRANES bday ,the winter Equinox on Sept 23,speaking of soulful matters)

Steve’s newest recording is a first in his career as it features the original and bold sound of his Flute only–‘Todo Flute’–in a singular context of two drummers + bass, (Roman Diaz + Jason Tiemann) along with several cuts with new star pianist Keith Brown
( the great Donald Browns son). Also on one remarkable cut Steve plays duo with the great John Scofield on guitar.

The title, ‘Spirit Calls’, is a unique combination of music that includes a wide range of composers from Dvorak to John Coltrane and many more. Each track shines a different light on the Fat and Focused sound of his technically ambitious flute voice and arrangements for Flute. From the solo ‘tour de force’ of Coltrane’s late and challenging composition ‘Expression’ to an amazing Indian Bamboo Flute arrangement of Dvorak’s theme, ‘Goin Home’ ( from his New World Symphony) this recording, with such variety and the singular sound of his flute is certainly a groundbreaking recording.

( Also contained is a bonus track #10 played on Alto Sax with his Quartet!)

Steve was asked to play Alto Sax with the iconic Master McCOY TYNERS QUARTET in 2016-18 both on the road and in New York City.

Exploring the great and singular compositions of McCOY, and being under his leadership is a great and inspiring experience. I have always felt that along with being the pianist who made the most original advances on piano after Bud Powell – (which is saying an awful lot) , he also has a unique gift for composition, sometimes overlooked because of the ferocity of his piano playing.

There is nothing quite like being on the bandstand with the great McCoy Tyner! 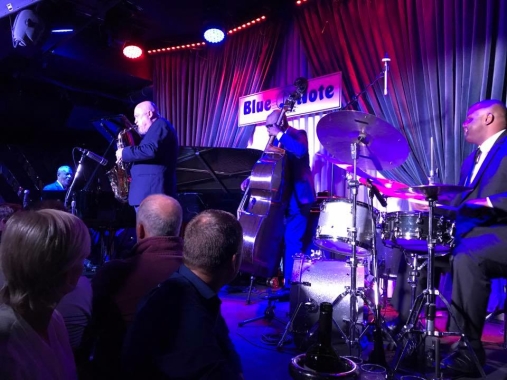